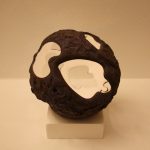 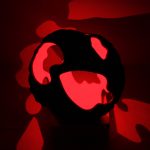 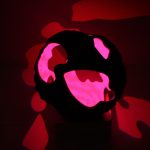 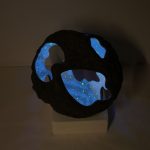 LIGHT SPHERE
There is a striking resemblance between the planetary model of the atom and the solar system with planets rotating around the Sun, but in reality electrons seem to be more like spherical, electric fields around a core and therefore the “Light Sphere” sculpture whose interior is transformed visually into a cosmos by the saturated light of leds, evokes a Renaissance concept that sees man as fluctuating between the infinitely large and the infinitely small.
A perforated, spherical form with a diameter of 23 cm, made of smooth, light-sensitive plaster of the inside and black sand on the outside, standing on a wooden base containing an expressly programmed Arduino card, Light Sphere n°1 is the starting point for a study of multiples of different dimension, quality of material and electronic testing in fading of light frequencies.
Centro Congressi Milano Fiori – Light Art and light design: artists and work on show at Lumen Fortronic organized by Gisella Gellini

Any cookies that may not be particularly necessary for the website to function and is used specifically to collect user personal data via analytics, ads, other embedded contents are termed as non-necessary cookies. It is mandatory to procure user consent prior to running these cookies on your website.